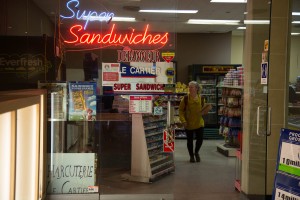 Are you new to McGill or tired of eating the soup and bagel combo at Tim Hortons everyday for lunch? Do you have a meal plan, but want some variety beyond cafeteria food? These wallet-friendly and mouth-watering choices will give your stomach something to think about when you get the hunger rumbles in the middle of class.

Kantapia is a cozy Korean restaurant situated near the corner of Rue Sherbrooke Ouest and Avenue du Parc. Opened in April 2013, Kantapia is a newcomer to the McGill restaurant scene, but has soon become a neighborhood favourite. Other than one dish, the Galbi, nothing on their menu is over 10 bucks! They have a selection of kimbap (Korean sushi), bibimbap (mixed rice in a hot stone bowl), and jigaes (Korean stew), to name a few. I recommend the kimchi jigae and soondubu jigae (soft tofu spicy soup) served with rice. After a cold day of running around campus, these dishes will definitely warm you right up. The best part of the Kantapia experience is the unlimited side dishes. The kimchi and marinated potatoes will keep flowing, as long as you keep asking.

Chances are, if you walk along Rue Milton to campus, you’ll have seen the sign for McGill Pizza. Unassumingly located on the first floor of an apartment building, McGill Pizza may have escaped your attention, but definitely give it a try. Although they offer choices other than pizza, their best deal is a slice of pizza with fries for only 5 bucks. Sure, it’s not the most nutritious of meals unless you count pizza as a vegetable. However, if you’re drowning in readings or papers and your body needs grease, there is no better place to get your oil fix than McGill Pizza.


Super Sandwich is one of those places that you either love or you haven’t heard of yet. A regular hang for management kids, Super Sandwich is in the Le Cartier building adjacent to Bronfman. The store itself is tucked away in the corner of a depanneur that can be easily missed. Don’t let its appearance fool you though; they serve a mean sandwich, most for under $4.00. They have many choices including ham, turkey, chicken salad, tuna, roast beef, and more. They might not have as big of a veggie selection as Subway, but their sandwiches definitely hit the spot when you’re craving a snack between classes.

If you’re too hungry to trek a couple of blocks away from campus, then you’re in luck! A variety of food trucks will now frequent McTavish Street and the area behind the Redpath Museum. It makes going to classes in Leacock so much harder when all you can smell are waffles, poutine, or roasted meats. Additionally, our very own Gert’s Pub in the SSMU building started serving lunch and bar snacks last year. They offer a different tasty special every day of the week.

And last but not least, there is Midnight Kitchen, or known to most students as “free lunch because I have no more money for food”. MK is a student run organization that serves vegan lunch every day in the SSMU building, Monday to Friday, from 12:30 until whenever food runs out. Typically, they serve on the 3rd floor, but on Fridays, they serve in the basement. The line starts forming around 12:15, but on busy days, the food can be demolished by hoards of hungry students as early as 1:00, so make sure to get a spot in line pronto!

Along with “Spotted McGill” and “Things McGill Students Don’t Say”, the “Free & for Sale” Facebook page is surely one…