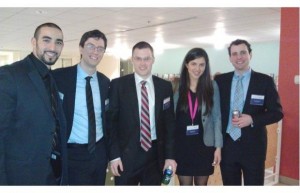 A group of five MBA candidates from McGill’s Desautels Faculty of Management won first place in the Boston Regional Final of the Hult Prize competition.  The team was composed of Mohammed Ashour, Shobhita Soor, Gabriel Mott, Jesse Pearlstein, and Zev Thompson. McGill has thus moved on to officially become one of five teams worldwide that will compete for the $1 million prize.

The Hult Prize is a prestigious business competition with a focus on social entrepreneurship. This year, 10,000 candidates applied, while only 250 teams were selected to compete at the regional level.

This year’s challenge was focused on the global food crisis. The teams were assigned to create a safe and sustainable business that was targeted towards making food more accessible and secure for people living in urban slums.

What was the McGill’s team’s solution? Crickets.

Although the eating of insects is not popular in North America, in other parts of the world it is fairly common. Ashour explained that they “are tapping into existing markets that already culturally accepts the eating of insects.” He continued, “We are simply formalizing a process, finding a way to make it very accessible and financially profitable, so that we can deploy it in more places around the world.”

The team outlined three ways of selling the crickets. First, the crickets can be cooked and sold whole to consumers. Second, protein extracted from the crickets can be put into flour. Lastly, a biopolymer from the exoskeleton of the cricket can be sold for industrial purposes. This final piece, the team says, will help ensure that the business remains profitable.

In order to promote entrepreneurship in the slums and make the crickets an even more reliable food source, the team suggested a cricket-growing kit that can be used in the home. Home consumers will be able to grow crickets, while any extras can be sold back to the team. Jakub Dzamba, a PhD student in Architecture who studies farming crickets in an urban farming context and founder of Third Millenium Farming, was consulted on the kits’ graphic design*.

Members of McGill’s team believe that the multiple dimensions of their plan set them apart from the competition. They point to the complementary assets of the individual group members in the particular domains of finance, law, and medicine, combined with their mutual backgrounds in business, as contributing to their success.

This summer, the group will participate in the final round, the Hult accelerator in Boston, along with the other four competing teams. During this two-month period, the team will work with the world’s best business consultants and advisors to make sure that their venture is as strong as possible before the final competition in September.

Before the accelerator, the team needs field research to back up their online research, which initially fueled this venture. In order to travel abroad, the team will need sufficient funding. Last year’s Hult winner spent $250,000 between Regional Finals and the final competition in September. Mohammed and the rest of the team stated that they “definitely look for contributions from the University, but given that we are the only Canadian team participating in the finals we are hoping that we will be able to attract resources from both Montreal, Quebec, and Canada in general.”

The team has been grateful for the advice and the support of McGill faculty and staff, in particular the Desautels Faculty of Management. According to Mott, “This really is a McGill project; there are so many people contributing. This is definitely something that is for all of Canada […] We are representing our country.”

* Editor’s note: There is a currently ongoing mediation regarding the degree of Mr. Dzamba’s contribution within the context of The Hult Competition. The article will be updated below upon resolution.

*Update: Following a mediation between The Hult Team and Mr. Dzamba, a recommended resolution has been proposed by McGill University citing Mr. Dzamba as owner of the cricket farming device concept, evidenced by patent  US 61/820, 196 filed August 2012. The proposed resolution also recommends listing Mr. Dzamba as a technical consultant to the project. The resolution is awaiting acceptance from both parties.

This October was McGill’s second Queer History Month. There have been several events discussing new authors and recent literary works…