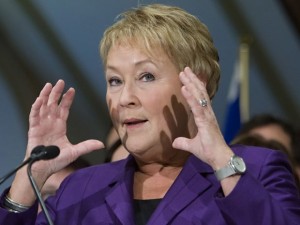 Principal Heather Munroe-Blum released an e-mail on Tuesday informing the McGill community of another round of budget cuts. The university was notified on February 8th that the $19.1 million cuts that were already in place will recur again next year; that is, they will double. This brings the total cuts to McGill University to $38.2 million by April 2014.

Munroe-Blum reassured staff and students that McGill would stay committed to fighting the government’s decisions, but added that the university is obligated to prepare for the worst. No final decisions have been made on how the cuts will be distributed across McGill’s services as the university continues to review its options. Provost Anthony Masi and Vice-Principal Michael Di Grappa hosted Town Hall meetings throughout last week to hear the concerns of the McGill community.

The budget cuts were issued by a Quebec government trying desperately to balance their provincial budget. All across the province, sectors ranging from natural resources to international relations will face cuts, and only core public services will be spared. In total, the Parti Québécois has cut funding to all Quebec universities’ by $124 million this year. Reflecting this stance, on February 7th, PQ Leader and Premier Pauline Marois stated that “some universities are overfunded.” The opposition parties have denounced the cuts, but the recently ousted Liberals are unwilling to send Quebecers back to the polls so soon after an election.

Munroe-Blum reaffirmed her commitment to continue working with CREPUQ (Conferences des recteurs et des principaux des universities du Quebec) and the provincial government directly to try to reverse the budget cuts. At this time, no plan has emerged on how to proceed. At a Senate meeting on February 19th, Masi presented considerations for McGill’s 2014 budget. The report includes “elaborations on key revenue and expense assumptions, along with other significant developments affecting the current five-year planning cycle of McGill’s strategic academic plan.”

SSMU President Josh Redel said that while the Legislative Council has not taken an official stance, the SSMU Executives will continue to oppose any budget cuts. They have released a letter about this position available on the SSMU website.

While SSMU is financially independent from the university, SSMU champions many programs that traditionally require contributions from McGill. Programs such as the Sustainable Project Fund could be in jeopardy if McGill decides to pull the money. Additionally, Redel believes that McGill will be less likely to financially support the SSMU Building considering the Administration’s new financial situation.

“No final decisions have been made and it is too early to say how this is going to affect McGill,” said Director of Internal Communications Doug Sweet in an interview with The Bull & Bear. As 75% of McGill’s budget is tied up in salaries, and considering the cuts were announced eight months into the 2012-2013 fiscal year, it is unclear how McGill will deal with the financial situation.

Despite the uncertainty of the near future, Principle Munroe-Blum concluded her message with some words of encouragement. “This is a difficult and worrying time for our community. It is a time for us to pull together. Together we will work our way through this crisis.”

By Samantha Larocque, Rochelin Dalangin, and Viola Wang Guest contributors As university students, we’ve all had the experience of struggling…