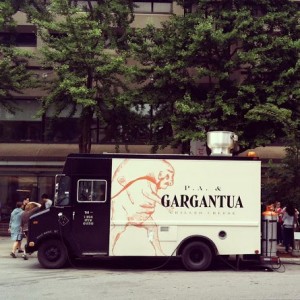 For the first time in 66 years, food trucks are once again gracing the streets of Montreal. A recent pilot project in Ville-Marie has made it legal for a select few food trucks to operate from June to September around specific areas of the city. In addition to this, a separate, but related food truck and trailer program has been running at both McGill’s Downtown and MacDonald campuses.

The Montreal program selected nine locations, including one on McGill’s downtown campus as test locations. The McGill program has consisted of a rotating shift of a smaller group of food trucks and one trailer camped outside the Redpath Museum by the Leacock building.

Daniel Jones, co-owner of waffle truck Guafrabec, explained the situation. “To start off, the city created a panel of judges to hear pitches from 40 or so food trucks. The city eventually granted a small number of permits to around 30 trucks, all of which were pre-existing restaurants or caterers.”

This criterion was included because of the concerns raised by restaurant owners who felt food trucks, which are held to less regulations than restaurants, may scuttle away with a key chunk of their business. The City Hall committee consisted of a chef, a nutritionist, a wine critic, bureaucrats and a few representatives from local development agencies.

Prior to the creation of the city’s pilot project, there existed a group of food trucks, Association des restauranteurs de rue du Quebec, that organized food trucks and helped them find work around the city. Once the project was created, they were given the mandate by the city to run a food truck schedule.

“As for the process of becoming legal, we are under the same rules of hygiene as restaurants,” noted Julien Ebert, from Pas de Cochons Dans Mon Salon, a mobile barbecue restaurant.

Food trucks have become popular in many other North American cities. There have been a number of different approaches to food truck projects across the nation, with varying success rates. Toronto’s cancelled “Toronto a La Carte” is widely considered a failure after driving many cart owners thousands of dollars into debt, but the city still has a handful of gourmet trucks and a large number of non-gourmet truck and non-truck options on the streets. Vancouver’s gourmet food truck market is faring a bit better than Toronto’s. Vancity actually ranks high in comparison with American cities, boasting 114 licensed food trucks as of last spring.

The City of Montreal chose locations specifically to avoid direct competition with restaurants. Another stipulation was that the vendors must operate within fully functional trucks. Food wagons are unacceptable as they must be towed or carried by another vehicle. This is particularly frustrating for mobile restaurants such as Pas de Cochons Dans Mon Salon, as they are a food trailer and are therefore not officially apart of the Montreal pilot program. As such, they are only eligible to operate at events or in areas that specifically grant them permission to operate, such as the Lachine Canal and the McGill Campus.

Gaufrabec also began as a trailer, but has since opened a brick-and-mortar shop and a truck of their own. “We started out in 2010 with mobile kiosks and we participated in festivals and special events in and outside of Montreal,” recalled Jones. “We decided to invest in a truck because it would be easier than the wagons. When we heard wind of a commission being set up to investigate the possibility of legalizing street food in Montreal, we thought it was amazing timing.”

“The challenge with McGill’s great location is that there are so many food options so close to campus. Our challenge is to give reasons for students to eat on campus instead,” he related.

“The idea of bringing food trucks at McGill started three years ago,” Laperle noted. “We were trying to submit different proposals to the University, but kept getting rejected for various reasons. This was around the time when the school was trying to eliminate all traffic on campus and the costs of the University operating its own truck was much too expensive. This all changed when the city decided to let food trucks operate.”

Initially the city had chosen McTavish Street for one of their locations for food trucks, but the choice was made without contacting the university. “Once the plan was rolling, we decided that the current Redpath location was best for us,” said Laperle.

Food and Dining Services at McGill wanted a variety of trucks to work rotating shifts at the downtown and MacDonald campuses, so they approached 15 different trucks individually, totally independent from the Montreal project and the food truck association. McGill also has different criteria than the city. For instance, they allow trailers like Pas de Cochons to operate on campus.

Pas de Cochons jumped at the chance to open up shop at McGill. “We were simply given the opportunity to operate on the McGill campus and we happily agreed,” Ebert beamed. “Someone from McGill came to see the trailer at the Just for Laughs festival, asked how we operate, our menu, prices and speed. From there, the rest was pretty standard. It was a good and easy process.” They have recently bought a truck and are in the process of getting it ready for the road for next summer.

Since this is the first year of the project, there are a still a few kinks to work out. “It would be useful if there was some sort of schedule available so people could know in advance which food trucks would be on campus at what time, and on what day,” suggested Merry Longthorne, U3 French Translation. Guafrabec’s Daniel Jones also had feeback to give. “Perhaps there could be more than one truck at a time,” he mused. “There is currently only one spot designated at Macfarm and one downtown.”

Ebert sees a bright future for food trucks at McGill. “As people on campus get used to having food trucks there everyday, it’s going to become one of the best spots in the city for a food truck,” he enthused. “The set up for us is really amazing, the campus is beautiful and the people are really nice to us.”

Laperle also has high hopes for the program going forward. “I would like to have have trucks on campus permanently, year round,” he asserted. “This would have the advantage of having something new and great everyday while requiring little investment from the University itself. One of the current issues is that most of the trucks are cash only. It would be a great to perhaps one day to see meal plans accepted at one of the trucks. It is still early. but so far we have had positive feedback.”

Guafrabec has also noticed a benefit. “Our business on campus is honestly better than on the streets of Montreal,” Jones revealed. “The response is better. It varies of course by day or even hour. It depends on the day of the week, the weather and other activities occurring at the same time.”

The waffle truck hopes to stay running throughout the winter. “We would love to be year round. We were told this was a pilot project that had a definite opening and closing date, but we would like, and are hoping for, a continuation of food trucks on campus all winter. Our product is appreciated in the cold.”

Running a food trucks can be a tricky business, but some think it can all be worth it. “We have  crazy hours and each week has its surprises, when its not the trailer that breaks, its a fridge,” Jones admitted. “Staff will not show up for work, or the sun doesn’t come out. You never know how many clients you’re going to get. It could go like that for a while, but its all forgotten when we see people eat, when they come to thank us after with a little bit of BBQ sauce on their face.”

Although the idea of the American Dream has long been disputed, especially in historical and political discourse, Donald Trump is…