Click on a topic to view each candidate’s opinion: 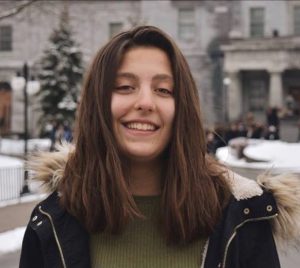 Running for VP Student Life in the 2018-2019 SSMU elections is candidate Sophia Esterle. As a former Douglas Hall Spirit Representative, and a former member of the SSMU Equity Committee, Esterle believes that she can utilize her experiences to “directly impact student life.”

Sophia Esterle’s main motivation, according to her campaign page, is to fix the many flaws in McGill’s on campus resources directed toward combating mental health issues. She has discovered through her own experiences that the system needs to go beyond telling students “to get better” and actually teach McGill students how to start helping themselves.

On the administrative front, Esterle plans to tackle to obstacles, such as enabling friends or trusted ones to book appointments for others that may not feel comfortable in taking the first step themselves. Her other course of action is to work with McGill Counseling to change their binary boxes denoting gender that are “purely wrong and discriminatory,” according to Esterle.

As a personal goal, Esterle hopes to achieve several tasks if elected. First, she would like to create “an in-residence support system coordinating with the Peer Support Center, McGill Counseling Services, or any group/service that would help.” Second on her agenda is to start “sharing sessions” at McGill’s residence halls to provide a space for students to open up about their experiences with mental health and acclimating to life in Montreal and at McGill. Third, she would like to improve the accessibility of clubs at McGill by creating an up-to-date database where all of them would be listed. Lastly, Esterle intends on creating a stronger media platform to encourage greater student involvement on campus.

Speaking with The Bull & Bear, sole candidate Sophia Esterle identified three main components to the role of VP Student Life: acting as a liaison between the SSMU and clubs and services, improving mental health services, and family care. Esterle emphasized her commitment to improving mental health on campus, saying that despite it constituting its own category, that all three of the aforementioned arenas contribute to mental health and wellbeing.

In discussing her platform plank to create an in-residence support system, Esterle indicated how it would be different from existing “floor tea” events and other support systems in residences. “[This system] would be specifically dedicated to talking about mental health,” she explained. “It would be a space where students can safely share their experiences with mental health, whereas floor tea is more like ‘hanging out’ and talking about your day.” Referencing her own experience with depression, she said that as she got better and talked about her own problems with friends, they opened up about their own problems. “I would hope that these sharing sessions would help people realize that they’re not alone, but also start more conversations outside of [the sessions],” Esterle explained.

Referencing the challenge of helping clubs and services fulfill their mandates and maintain student engagement during the SSMU building closure, Esterle discussed working with different buildings on campus, faculty associations, buildings near campus, and even McGill residences, if need be. “I’ll do my best to encourage student engagement by using social media, putting up flyers in buildings, clearly indicating the location of events,” she said. “It’s going to be challenging, and obviously more complicated, but I would work to have as much transparency and have specific places on campus available to find out where events are happening.”